LIFE EXPECTANCY OF A SCUBA TANK

LIFE EXPECTANCY OF A SCUBA TANK

ALUMINIUM TANKS
Eventually aluminium SCUBA tanks, if they are filled enough times, will fail because of sustained load cracking but there is good news and that is that they can be filled up to 10,000 times.
That’s about 100 years if being filled twice a week.

CAUSE OF ALUMINIUM TANK FAILURE
The failure rate of aluminium tanks is less than that of steel tanks but when they do fail it is usually because of one or all of three things. Excessive corrosion can occur at the top of the tank, at the thread/valve interface, or at the bottom of the tank if there is a tank boot. The third common reason for failure is due to cracks discovered during a visual inspection.
Preventative maintenance is worthwhile. After use, especially so after salt water use, wash and dry, paying particular attention to the valve/cylinder interface, if the tank has a boot, remove it and clean the cylinder and the boot, allowing both cylinder and boot to dry before replacing the boot.
Store in a safe, cool dry place.

WEAK/FAULTY ALUMINIUM TANKS
Generally speaking, some aluminium tanks made prior to 1991, were made of a 6351 alloy, which had a sustained load cracking weakness. Not all aluminium tanks made prior to 1991 were made of 6351 allow, viz Catalinas were not.
Of those that were, they should be considered to be at risk of fracturing or exploding.
Since the adoption of the eddy current inspection protocols1 for aluminium tanks, no tank made of the 6351-T6 alloy has been documented to have escaped the identification of sustained load cracking. A minute crack in a tank can take years before it ‘grows’ to the point where it is visually identified, the upside of the eddy current testing procedure is that it sees cracks in a tank before the human eye can see them.
1 Not for use on steel cylinders.
To put it in perspective. Of the 25 million tanks made of the 6351 alloy, only 19 have catastrophically failed (of course that is 19 too many). Also, of note is that the US determined that it was not warranted for the 25 million tanks made of this suspect alloy, to be recalled.
Specifically, the following summary may be helpful.
All Walter Kidde DOT-3AL cylinders, of which production ceased in January 1990, are made of alloy 6351-T6. Cliff Impact DOT-3AL cylinders were made from alloy 6351-T6 before July 1990, at which time Cliff Impact changed to alloy 6061-T6.
Catalina Cylinders did not produce any DOT-3AL cylinders from alloy 6351-T6; therefore, cylinders manufactured by Catalina are not subject to this notice.
Until determined otherwise, any DOT-3AL or DOT-E 7235 cylinder should be assumed to be made of alloy 6351-T6, if it was: 1. Manufactured by Luxfer USA before 1988; 2. Manufactured by Cliff-Impact before July 1990; 3. Manufactured by any other company in the United States, excluding Catalina, before February 1990; or 4. Manufactured outside the United States.
Aluminium alloy cylinders manufactured between 1972 and 1988 to specifications DOT SP6498, DOT E6498,
DOT E7042, DOT E8107, DOT E8364, and DOT E8422 and Australian made aluminium alloy cylinders manufactured before 1991 to AS 1777.

DO ALUMINIUM TANKS HAVE FINITE LIFE?
There appears to be no correlation between age and sustained load cracking in aluminium cylinders. Interestingly, as at 1999, there are many thousands of cylinders made in the 1970’s that were still in service.

STEEL TANKS
If a steel tank is properly maintained and cared for, there is no known reason as to why its life span should not be considered to be indefinite, provided it does not fail hydro or visual inspection.

CAUSE OF STEEL TANK FAILURE
Unlike aluminium, steel has an inherent weakness and that is ‘rust’. Internal and external corrosion is the weak point of steel cylinders and is the main reason for them failing inspection at test.

CARBON FIBRE TANKS
Carbon fibre tanks have an expected life of 15 years. While they are very light, they are also very buoyant, particularly when near empty. This requires that the diver carry more weight, typically 1-2kg.
Generally, they have a burst pressure of 851 bar whereas a steel cylinder has a burst pressure of around 430 bar and as such have a much higher air resource than the aluminium or steel tank. 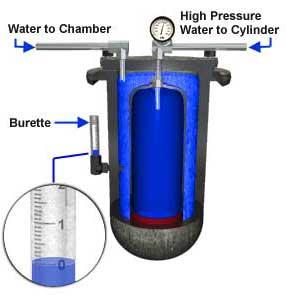 Notwithstanding previous comments regarding aluminium tanks and life span, in principle, a properly maintained SCUBA tank generally has an ‘unlimited’ life span. They will of course at some point fail a test.

HYDRO AND VISUAL TESTING
There are three main methods of testing a SCUBA tank.
1) The most important test is the visual inspection, both inside and out. Most cracks are found by a visual inspection, which accounts for approximately 90% of tank failures.
2) Hydrostatic testing (picture on right) is not good at finding cracks. (Hydrostatic test – ‘static’ = still, ‘hydro’ = water). This test involves filling the tank with water and then pressuring the tank to the test pressure and measuring the volume before and after the test. If the volume of the tank after the test is above the tolerated levels the tank will be failed.
3) Finally, there may be an eddy current inspection. Aluminium tanks only.

New Zealand Worksafe make this valid comment: Eddy-current testing does not eliminate the need for a thorough visual inspection by a properly trained and qualified periodic tester.
For a simple look at how a hydro test is done, go here (volume is not good – visually it is informative): https://www.youtube.com/watch?v=TvowVlb0Wyo

FAILED TANKS
Generally, about 12% of tanks tested, fail the visual test – which reveals damage (both internally and externally) that exceeds the allowable limits. Very few tanks fail the hydrostatic test. It should be noted that most of the internal and external damage on a SCUBA tank is preventable by the user.

1) Protect the tank externally and don’t allow it to be gouged or scratched, or to develop rust or corrosion, especially under the tank book (if it has one). The boot should be removed after each use and not placed back on the tank until both are thoroughly dry.
2) Protect the tank internally by never ‘sucking’ it dry. Always leave a tank with some pressure internally, even if storing it for an extended period of time. This prevents moisture from gaining access.
3) Thoroughly wash and dry the valve/tank interface.
4) Store in a protected, cool dry place.

STORING A TANK FULL
A SCUBA tank is designed to hold a sustained pressure load its entire life. However poorly filtered air contains hydrocarbons and other contaminants the can deteriorate in such a way as to affect the metal of the tank adversely, in as little time as months or even weeks.
An internally clean dry cylinder with clean dry air will store safely for long periods. However, if it is planned to store the cylinder over a long period of time (i.e. mothballing), it might be wise to considerably reduce the internal pressure – do remember to keep some internal pressure so as to keep moisture etc from gaining egress.

EFFECT ON TANK BECAUSE OF HYDRO’S
There is no evidence that hydrostatic testing of tanks causes damage to the cylinder.

CORROSION
Moisture that gets into the tank can cause serious damage. 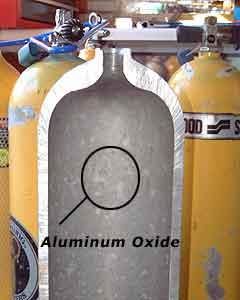 Before storing, ensure the interior is completely dry. Moisture within a steel cylinder will increase the oxygen levels which will in turn contribute to corrosion within the tank. This increased corrosion has the effect of then reducing oxygen in the tank, even to the point where there is not enough oxygen in the tank to sustain a diver’s life.
In this regard aluminium tanks fare much better, as they cannot rust.

ALUMINIUM
The by-product of moisture in an aluminium tank is aluminium oxide. This is dangerous to breath as it will penetrate down into the lungs.
If a tank has this oxide, it will lead to a tank being condemned.
One way to clean a tank internally is by wire whipping or rumbling, but this cannot be done in an aluminium tank as the softer metal will be damaged to the point of destroying the tank.
Whereas eddy current inspection is not for use on steel tanks, wire whipping or rumbling is not for us on aluminium tanks.

STEEL
The by-product of moisture in a steel tank is rust (ferrous oxide), and while this is not nice to breath it does not have the inherent danger of aluminium oxide, as rust particles cannot easily enter the lungs.
If rust is found in a steel tank the options are to wire whip it or to rumble it – both do an internal clean. Rust is a common problem with steel tanks and it is for this reason that steel tanks do not last more than about 30 years.
This again brings us back to careful maintenance of the tank.

ULTIMATELY, IT’S THE OWNERS RESPONSIBILITY
In discussing SCUBA tanks and their life expectancy with Paul, the Principal of Ozaquatec, in Brisbane made these observations:
1) Who is doing the service of the tanks (not all service centres are equal)?
2) How is the tank being looked after (is it being done diligently and carefully)?
3) Is the user following proper instructions re tank maintenance and care?

Paul also noted that a tank would not normally be failed because of its age but went on to state that maybe a tank that is about 40 years of age might be considered to be getting near the sunset of its life.
________________________
Notes regarding pictures:
The hydro static testing picture is public domain
The rusty tanks picture is copyright cleared
The aluminium oxide picture is used with permission

The encyclopedia and dictionary is provided as a service to the global SCUBA and underwater community. If you've found the Encyclopedia useful, please consider a donation.
Thank you.
please Help